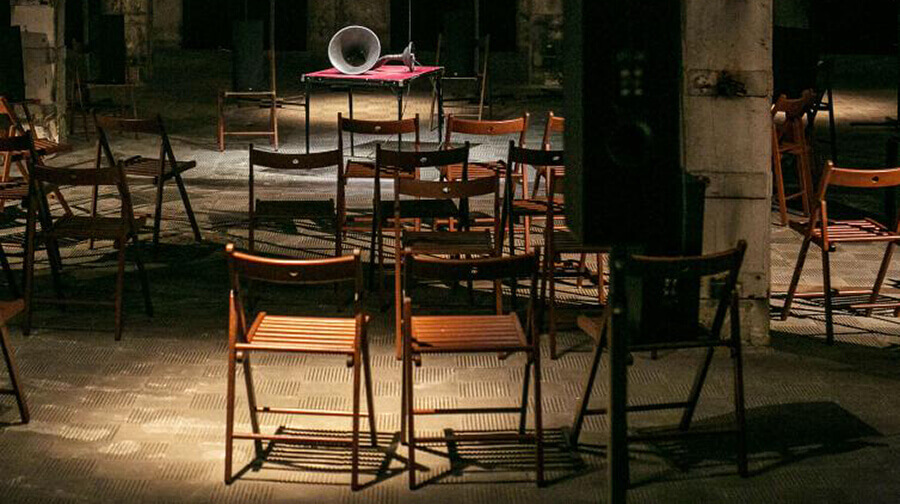 “The Murder of Crows” is an installation created by Janet Cardiff and George Bures Miller in 2008 that is exhibited for the first time in Spain at the Centro de Creación Contemporánea Matadero Madrid. This installation seeks to explore the sculptural qualities of sound creating an immersive narration, like a film without images, which makes the viewer enter an almost extrasensory world.

Inspired by “The Dream of Reason Produces Monsters” by Francisco de Goya, this work consists of 98 loudspeakers distributed in different points of a closed room, through which you can hear how the sounds roam the space. The piece lasts 30 minutes and is broadcast in a loop every half hour, being heard from a single point or moving within the room.

Janet Cardiff and George Bures Miller are two Canadian artists who work mainly making sound installations with which they have gained wide international recognition. Their most emblematic works include the “Audio Walks” or auditory walks, made in the eighties and nineties of the twentieth century, as well as his installations “Paradise Institute” (2001) with which they represented Canada in the 49th Venice Biennale and “Alter Bahnhof Video Walk” (2012) created especially for the Documenta of Kassel that year, the Documenta 13.

“The Murder of Crows” can be visited until next July 24 and for the duration of the piece and the content of the same, access is not recommended for children under 12.

“The Murder of Crows”

Give time to our time at the Centre Pompidou in Malaga

In search for new Environmental horizons in the Conde Duque